RESYS is a worldwide unique wireless (and optionally wired) full duplex rescue communication system, designed to be used in underground excavation mines including places susceptible to firedamp and/or combustible dust.

Additional devices that can be attached to PC1.0 personal communicators or REP1.0 repeaters via 2.4GHz air interface:

Communication with devices that are out of immediate radio range (e.g. Base located more than 2km from the communicator) is conducted via wireless backbone network made up of REP 1.0 Repeaters.

PC1.0 Communicator is a radio device mounted on the miner’s helmet in a form of hearing protector. Thanks to this solution, it is highly ergonomic and enables the rescue team member to work with both hands.
Communication within a team works in a continuous way, without the need to establish connection (full-duplex) – everyone hears each other and can talk to each other all the time.
The ready-to-operate device weighs 650g, 140g of which weighs the battery. The battery is replaceable even in explosion hazard zones. Its capacity of 3000mAh allows 12 hours of continuous operation.
Connection between Personal Communicators is conducted immediately as long as the rescue team members are within each other’s radio range and/or via wireless backbone network based on REP 1.0 Repeaters whenever the team members are outside of their immediate radio range.
Repeaters are the elements of the wireless backbone network and have two basic functions: as relays retransmitting signals and as network access points.

Fiber optic connection is also used to connect M1 Base or the first Repeater to the Mine Rescue Action Management above the ground using the existing mine fiber optic network.
Both Personal Communicators and Repeaters are radio devices operating on the radio frequency of 840-880MHz with the transmitter power not exceeding 500mW. Access to the transmission media is based simultaneously on TDMA and FDMA methods.

In order to build a backbone network, certain amount of Repeaters are located in drifts. The amount of Repeaters depend on two basic factors: length of the drifts that have to be put within the range of the network and the density of their location.
Density of the repeaters, that is the amount necessary to cover certain area depends on the factors that influence the propagation of radio waves, the most important of which are:

Theoretical maximum number of Repeaters working in one network is 255. However, such number of retransmitting relays will cause a few seconds delay. Thus, maximum effective number of Repeaters is between 50-70 (during our underground tests, less than twenty units were completely enough).

Because of the antenna polarization, repeaters should be operated in vertical position. It is ensured by the method of its assembly – the repeaters are to be hung by a carabiner at the center of the antenna to the elements of the excavation support (headboard, lining) or elements of underground installations (pipes, cables etc.) using any sling made of wire, textile strap, rope, chain etc.

Repeaters should be located in the passage opening in such a way that the smallest distance from sidewalls, ceiling or footboard is at least 0,5m. They are designed to be small-sized lightweight devices, easy to carry and to operate.
A ready-to-use Repeater weighs 440g, 140g of which weighs the battery with capacity of 3000mAh that allows 15-20 hours of operation. The batteries are replaceable even in explosion hazard zones.
Repeaters use omnidirectional antennas what makes their installation easy. It can be very important in places with limited visibility.

Establishment of the network is easy and supported with voice commands coming from Personal Communicators what ensures the users that they are doing it properly and increases the effectiveness of the network assembly.
In order to cover a 1km passage with the range of the backbone network, with the range between Repeaters of about 140m, 8 Repeaters should be mounted, the overall weight of which slightly exceeds 3,5kg. Repeaters can also be connected with each other with single-core fiber optic cable through mediaconverters.

PC1.0 Communicator and REP 1.0 Repeater allow also the wireless telemetry data transmission from both the devices (battery level, location data) and external sensors and devices working in 2.4GHz radio interface. Such data is transmitted to the M1 Base (underground) and in the event of an alert – to the other members of the rescue team.
M1 Base is a device used to support the management of a rescue action in an underground excavation than enables wireless voice communication between its manager (KAD) and mine rescue team members. The M1 Base allows also to read data from the sensors of the rescue team members’ equipment such as heart rate sensors as well as from repeaters and the devices connected to them.

The M1 Base can also be connected to the surface rescue action management via fiber optic provided that the excavation site is equipped with proper optic network.

The M1 Base can also cooperate with PC computers with RESYS software installed and transmit current data through Wi-Fi (underground) or fiber optic (on surface).

The basic communication interfaces of the M1 Base are:

System also allows to locate the rescue team members and alarm whenever any of them remains still for longer.

Rescue team members are located on the basis of the radio signals of their Personal Communicators against the nearest Repeaters and depicted graphically on the screen of the computers with Resys software both in the underground base and on the surface, provided that proper fiber optic connection is established.

M1 Base as well as the other devices of the system are able to record conversations and store transmitted data. Up to 5 teams, each having 5 members can take part in the rescue action.

Functional tests have been conducted on 5th, 18th and 26th of November 2015 in an active coal mine – KWK Krupiński.
The tests of 5th November aimed at verifying radio propagation and connection in presence of obstructions, such as dams, intersections and horizontal deflections. Simulated rescue action was conducted 602m (the first aquifer) and 420m below ground level. Two teams took part in the operation, teams of Central Mines Rescue Station and the Coal Mine rescuers. 50m long fiber optic cable line was laid from the base situated near shaft #3. Then, Repaters have been connected through a mediaconverter and attached to the excavation ceiling, in the passage opening and in the intersections along the way to the simulated rescue action site. During the action, rescuers used communication interfaces with boom microphones or wireless microphones attached to breathing apparatuses. Obtained effective distances between repeaters depended on the propagation conditions, that is the obstructions. Obtained distances were from 35m (2 deflections of the drift) to 243 meters. Along the whole way from the first to the last repeater, communication with the rescue base and between the rescue team members was correct. Also ‘connection on demand’ with the base and/or another rescue team member and their monitoring worked properly.

On 18th and 26th of November the following functions of the system have been tested:

The tests confirmed full usefulness and functionality of the system and the maximum effective range of the system obtained in the tests was 2km. 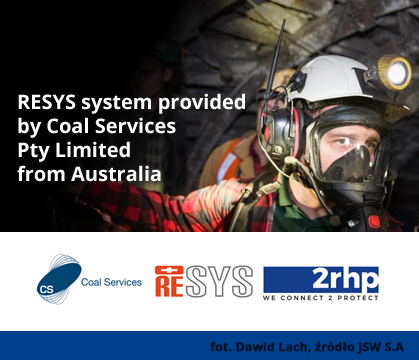 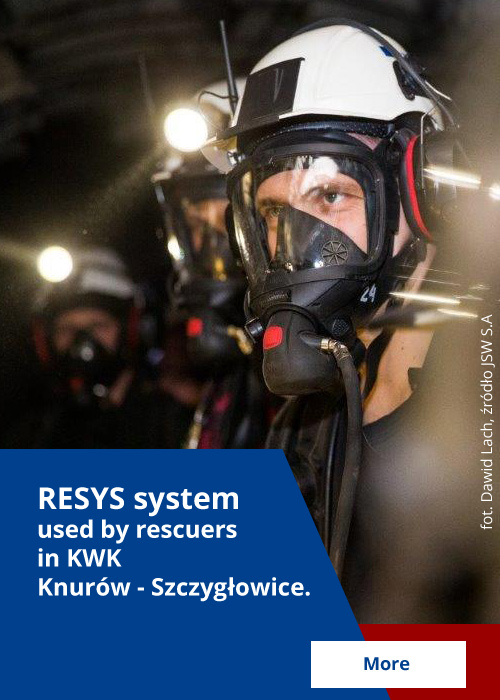 Latest news:
2021-05-21 | Contract with Coal Services from Australia.
2RHP Ltd. informs that on May 10, 2021, we signed a contract with Coal Services Pty Limited from Australia. |Więcej...
2020-05-11 | JSW S. A. uses the Resys system.
The Knurów - Szczygłowice Coal Mine as the first in the JSW S.A. capital group equipped its two mine rescue stations with the RESYS system. |Więcej...
2020-01-15 | Official distributor of the RESYS communication system in Africa
Dedela  Group Mining Consultants is the official and exclusive distributor of the RESYS wireless rescue communications system in Africa. |Więcej...
2019-03-19 | Certificate IECEx for devices of the RESYS System
We are pleased to inform you that certificates for devices of the RESYS System have been published on the IEC website. |Więcej...